A reflection, nine years on… 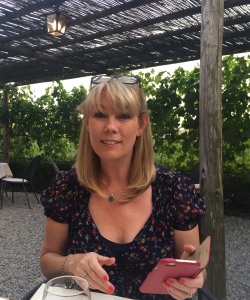 The 30th August 2007 was the day I was diagnosed with pancreatic cancer. A disease I hadn’t ever heard of and, at the time, I had no real understanding of what I was about to endure. I had no idea that the survival statistics were so poor and that I was then facing only a 3% chance of surviving beyond five years.

But, survive I have, and more years than many others who have faced the same diagnosis. That’s because I was diagnosed in time for surgery to be possible. My surgery was a distal pancreatectomy and splenectomy where I lost 80% of my pancreas and all of my spleen. Of the two main surgical procedures, mine was the lesser but it still took five hours to perform and several weeks to recover from. I followed this with six months of chemotherapy including two drugs: gemcitabine and cisplatin then a further 5 weeks of chemo-radiotherapy.

It was nearly a year’s worth of treatment: weekly appointments with the oncologist, then daily appointments at the radiotherapy centre. I was becoming used to a kind of institutionalised lifestyle and the support of my medical team along the way.

Then it all stopped and I began to feel the loss of that support and framework to my life. It was a good thing to rid myself of so many hospital appointments but nevertheless I felt a kind of emptiness which was compounded by an overwhelming sense of what had just happened to me. I suppose had I been a soldier back from Afghanistan, I may have been labelled with Post Traumatic Stress Disorder – something I can really relate to.

However, with the strength that my family and friends have given me, I have been able to cope (more or less) with the impact of the pancreatic cancer diagnosis and the resulting survivor’s guilt and was helped in a major way through my founding of and working at Pancreatic Cancer Action.

My work at the charity is a daily reminder that life isn’t all about me – there are many touched by this disease who are far worse off than I am and it is my life’s work now to try to ensure many more are diagnosed sooner so they too can have the same outcome as me.

I now, more or less, live a normal life, but there are some things that have changed since my surgery. I am insulin dependent diabetic – type 3 – a type I had never heard of (and some doctors are unaware of this type too!). I need to be on permanent antibiotics now I don’t have a spleen, and I can suffer the effects in wintertime of the peripheral neuropathy which is a hangover from my chemotherapy treatment.

I am currently being investigated for new changes to bowel habit and being fast tracked (this time!) for urgent referrals for tests. It is a bittersweet irony that on the anniversary of surviving nine years following pancreatic cancer, I am awaiting the results of a CT scan to see if anything nasty has returned. The fear of this is as real as it has been throughout the past nine years and I guess it is something that will never leave me. Hopefully it will only mean I will now have to take CREON with meals to help me digest food properly – something I have managed to avoid so far!

But I am lucky, I have been here to see my two boys grow up into fine young men, enjoy lots of family holidays to lovely places including Australia, Egypt and Africa, go on walks in the woods with my dogs and to still have the support, love and company of my true best friend, my husband Phil.

As I enter the 10th year of my diagnosis, there is a lot to reflect on and a lot to be thankful for. Next August will mark my 10th anniversary and, statistically, only 1% of us diagnosed with pancreatic cancer ever live that long.

When you’re at the beginning of your ‘journey’ with pancreatic cancer, it almost seems inconceivable that you will hit those milestones and become one of those slim statistics. My husband’s positive attitude and mantra that I was a statistic of one: my disease, my treatments, my outcome. This helped me mentally get through and to believe that I could be one of the 3% (to survive 5 years) and now to believe I will make up one of the 1% to live for 10 and more years. Here’s hoping!

Like Loading...
← Pancreatic Cancer Europe has its first board meeting and celebrates its move to being a formal legal entity
I’m insufficient – in the pancreas department! →